What do you get when you mix stripped-down garage rock, red poofy hair, advice on how to make people uncomfortable in a bathroom and a Web site known for breasts?

A recent live recording You Me Them Everybody show, of course.

Recorded on February 22 at Hungry Brain, the show delved into more up and coming Chicago music and comedy with a couple first-evers. Alex White, of the roots garage rock group White Mystery performed her first ever solo set, after nearly 10 years of playing live music. Comedian Cameron Gillette performed his first recorded set with bizarre observations on trying to lie to his parents and getting the whole audience to say, “I make funny sounds because I’m angry with god.”

The show also featured Playboy.com Editor Scott Smith talking about the joys of Beverly and getting used to a job where it’s okay to look at naked women all day.

Alex White kicked off the show, exuding a shy comfort with the even-more-stripped-down version of her already minimal garage rock. She was armed only with a Rickenbacker semi-hollow body guitar, her howling yet sugary voice and a bass drum that broke midway through her five song set. Her music is naked, soulful rock distilled to the rule breaking, head busting spirit that has either scared people or turned them on since the guitar was first made electric.

White shifted back and forth from distortion-assisted chords and gentle muted picking, with her red fluff of curly hair bouncing with the beat. Her voice was musical and clear, but with urgency and primal energy, like she would scream at any second. She tapped into that primitive form of rock with a laugh and smile throughout the set.

After her set, she talked with YMTE hosts Brandon Wetherbee (founder of YMTE) and Esmeralda Leon about ditching lessons at Old Town School of Folk to start her own band, the power of Baba O’ Riley and singing Staples Singers covers like “Will the Circle be Unbroken” with her mother.

“It’s about your mother dying and I do a duet on it with my mom,” White said about the song.

White Mystery has a new album coming out, with a record release show March 20th at the Hideout.

For everyone who says digital doesn’t have the warmth of analog, here’s what might be one of the grainiest digital videos taken.

Later in the talk, Wetherbee hassled Smith about his love for Beverly and a short feud Smith had with Richard Marx over some blogs a few years ago (http://www.youtube.com/watch?v=i26qpuqjAsA). Wetherbee also prodded Smith about his Twitter account picture.

“You’re doing the face where ‘I just made a funnier joke than everyone else and I’m smarter than you, so let’s have this smartini,’” Wetherbee said. “But I know you, and you’re not that like that.”

“I would totally kiss you if that would be on your Twitter page,” Wetherbee shot back.

By some stroke of blind (dumb) luck, I shot a picture right as Smith was making the face he makes in the Twitter photo. 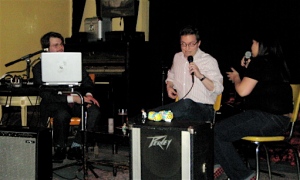 Comedian Cameron Gillette closed out the show with a series of random one-liners that required thinking for a moment or two before the laughing came. And it was brain power spent well. During his first-ever recorded set, he had the room laughing hard.

“I had a hard time telling my parents I was gay,” Gillette said. “But I have an even harder time lying to them.”

To close his calm, deadpan set, he brought the audience into a call and response that had the crowd saying “I wish my dad had loved me more,” among other oddities.

You Me Them Everybody meets every Monday night at Hungry Brain for more music, comedy and random outbursts of debauchery. www.youmethemeverybody.com